It was created in honour of the popular former President of the Keighley and Craven Athletics Club, whose sudden death was announced at the start of the annual Fell Race. The first to receive the prize was Colin Feather of Marsh Harriers (1st Veteran Over 60).

The Fell Race, which was the opening event of the Village Fete, attracted 31 runners. It was won by Christian Holmes, who shaved 21 seconds off the previous record coming in at 22 minutes 27 seconds. Further results are summarised below.

Marsh Harriers were judged the winners in the tug of war competition against The Rest of the World, and in the Junior tug of war game, The Girls beat The Boys.

Also in the arena were Dog Agility demonstrations, children and family races and a school performance led by the Revd Nigel Wright. Haworth Band played, plastic ducks were raced in the beck, there were the usual stalls, home made cakes were plentiful and warm drinks  appreciated.

Ken Eastwood, Chair of the Millennium Green Trust, said, “I’d like to thank everyone involved with the fete, including our sponsors and the volunteers who worked tirelessly before and after the event. It was a lovely village fete, enjoyed by all.”

The annual Fete raises money for the upkeep of the village amenity, the Millennium Green.
FELL RACE 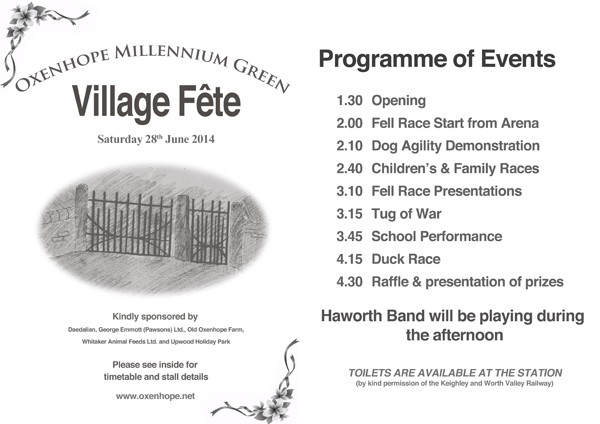 If doing so please contact us by email to confirm the donation made.