An estimated 450 local people enjoyed an afternoon of traditional fun and games at Oxenhope’s Village Fete on Saturday 20 July 2013, opened by Kris Hopkins MP. Organisers were delighted to see the turnout after last year’s disappointing cancellation of the popular event due to the Millennium Green being water-logged. Jeremy Mackrell MBE, Chair of the Millennium Green Trust, said, “We’d all been hoping for dry weather this year and although it was a little cooler on Saturday we weren’t disappointed.”

The weather conditions favoured the 35 fell runners who set off from the Arena for the scenic 3.3 mile race.  Christian Holmes of Wharfedale won in 22 minutes 48 seconds, breaking the previous record by over a minute.

Sisters Sophie and Phoebe Cowling won first and second prizes in the Kings and Queens themed fancy dress competition, and the winning Coronation cakes were baked by Eleanor Thomas, age 11. The Arena was the scene for children’s and families’ races and Tugs of War. A  performance by local children singing songs, with the Reverend Nigel Wright playing guitar, was also enjoyed by the onlookers despite a failure of the sound system.

Stalls run by different village organisations reported a brisk trade and the fairground rides were enjoyed by the younger children. Haworth Band provided a varied programme of popular melodies and the afternoon concluded with a sellout number of competitors for the Duck Race in the Beck, won by Katie Barber.

Ken Eastwood, Millennium Green Trustee, said, “On behalf of the Trust I’d like to thank everyone involved, including the volunteers who worked tirelessly before and after the event. It was a great village fete, enjoyed by all.” 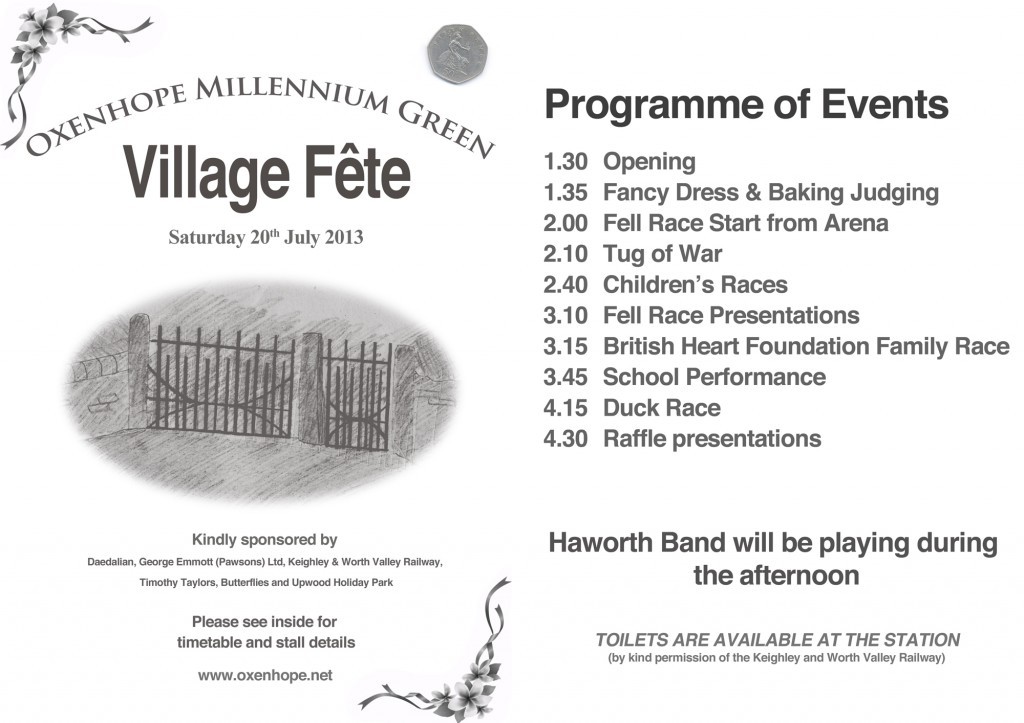 If doing so please contact our Treasurer by email to confirm the donation made.